Having rented our SUV and packed the night previously, we were able to leave the house at 7a.m. There was a little tension as our son placed his fancy roadbike over all of our luggage at the last minute. We took a deep breath and hit the road – “Calgary or Bust!

“We planned to take the TransCanada Highway, north around Lake Huron and Lake Superior -through Manitoba, Saskatchewan and Alberta – stopping to drop off our son in Calgary, and head back the same way. (later we decided to take a slightly different road back). I am posting this trip a few days behind as writing and posting while travelling didn’t seem to work at all for me!  We wanted to travel as far as we could in the first day – 15 hours or 1400 km or so – while we were still feeling enthusiastic, and do shorter segments the next 2 days….. and we wanted it to be “the fun car”.

We regularly travel North and East to Ontario’s cottage country – (there are a few) – it’s generally 3.5 to 4 hours from our home (which is) west of the Greater Toronto Area.  I will begin the story then as we reach Sudbury Ontario, when the scenery began to be new to me!

As we approached Sudbury – we were excited to see a wildlife crossing bridge – similar to those we had seen in Banff Alberta.  We hoped to see more – but that was it, and I missed the photo op too.  The photos below are not mine!  This section of the highway has been troubled with accidents involving vehicles and wildlife – deer, moose and even re-introduced elk.  The wildlife bridge is Ontario’s first – and wildlife underpasses and fencing have also been added or are being added.

Wildlife bridges allow animals to cross over the highway and prevent collisions.

As we drove past Sudbury – we encountered some road-work and I once again failed to catch another important photo-op – The Big Nickel. At this point I realized that I was going have to learn to be a little faster on the draw with my phone-camera! Everybody else has known this for a long time.

The giant smokestack was plain to see from everywhere – but in the confusion I didn’t get my cheesy tourist photo of the big Nickel.

Sudbury is home to the Inco smelter and it’s giant chimney.   The giant smokestack or superstack is 381 metres high – and is the largest chimney in Canada and the Western Hemisphere.   Sudbury has a rocky landscape – a meteor hit the area about 1.2 billion years ago, leaving behind an enormous crater.

My husband shared the story with us of rocky and rugged Sudbury being used to train Apollo astronauts about the moon’s landscape and geology.

We travelled from Sudbury along the north channel of Lake Huron through the small towns of Espanola, Massey and Blind River, and easy drive through lots of forest, lakes and rivers. At Sault Ste. Marie, we are as close as it gets to the United States border, and my cell phone thinks I’m in the U.S.  Our GPS wants us to go through the U.S., but we can’t – the borders are closed to everyday people for now! Sault Ste Marie -or “the Soo” – please don’t call it “The Salt”- (for Southern Ontarians like me that’s just shameful, almost like calling a Philips Screwdriver the crissy crossy one)….. The city is a twin with Sault Ste Marie Michigan – on the other side of the border, separated by the St. Mary’s river.  Sault means the rapids – so the name means the Rapids of St. Mary’s.

The “Soo” is a city with a beautiful Marina/Waterfront, as well as being a transportation hub. We grabbed a few silly photos and some gas and fast food, but went straight back to the TransCanada to keep moving.

We headed north along the north shore of Lake Superior.  We had views of green forests, rolling hills, and beautiful shorelines.  Soon we had our first “unique” wildlife sighting (something different to us) – our son shouts from the back that there are some crazy brown birds – he missed the photo as well,- but we figure out that they are Sandhill Cranes. Wikipedia tells us that these birds migrate to and throughout Canada in the spring, summer and fall – we just haven’t seen them before!

We head towards Batchawana Bay, the Montreal River, Agawa Bay through Lake Superior Provincial Park and on to Wawa.

Batchawana Bay Provincial Park is the site of a beautiful beach, with an panoramic view of Lake Superior.  We spotted a sign for the World’s Best Apple Fritters, which lured us to stop across the road.  A few people were relaxing by the water, enjoying the lovely beachfront and view. Our son ran in to the road at the Voyageur Cookhouse and bought us 3 apple fritters.  THEY ARE THE BEST.  Absolutely!  This is a great place to have a quick stop on a long journey – stretch, put our feet in the warm water, eat a fritter and off we go again.

As we travel along the TransCanada, we see lots of shoreline and forests, and increasingly rugged -shall we say “mountainous” landscape as we wind along the highway.

The scenery so far has been varied and spectacular.  It rivals Albert’s Banff and Jasper in beauty with it’s rocky scenery, the green forests, and lakes and beaches, and the mountainous terrain. It’s accessible – we could just stop wherever – have a hike, dip our toes in the lakes or drop a fishing line along the way.  (If we wanted – we were on a mission to get to Calgary after all).

Also – we saw wildlife!  We travelled over the Montreal River, past Agawa Bay and through Lake Superior Provincial Park, towards Wawa.  Just prior to Wawa a red fox strutted down the road carrying some sort of large rodent. (Does that count for two wildlife sightings then?) He stopped to look at us with some bad dog attitude, not concerned at all about us or the rest of the traffic.  He was a lovely red with black socks.

The fox reminded me of our Goldendoodle holding socks or something else he knows he’s not supposed to have, but he’s proud of it…..

Feeling bad about me missing my Big Nickel photo, back in Sudbury, my husband pulled off to Wawa to surprise me with the Giant Goose.

Wawa means Wild Goose or Land of the Big Goose in Ojibwa.  The Goose is apparently one of North America’s most photographed tourist landmarks.  The tourist welcome centre was closed due to the pandemic – but the Gitchee Goomie carvings by local artist Spike Mills were colourful and cheerful.

I’d like to claim that I knew from Longfellow’s poem “Hiawatha”, that Lake Superior is called Gitchee Goomie – but nope.  I know this from Gordon Lightfoot’s “The Wreck of the Edmund Fitzgerald”. “The legend lives on from the Chippewa on down of the big lake they called “Gitche Gumee.“

We also stopped to read the historic plaques and view the displays, and then we headed back to the highway.  The blackflies and mosquitoes had chased us back to the car.

After Wawa, the highway dipped inland a bit, then back along Lake Superior again.  We passed Marathon, then Terrace Bay, Nipigon and headed towards Thunder Bay.

We saw increasingly rugged and beautiful landscapes along the way. Just before Terrace Bay, a black bear sat happily in the ditch by the side of the road.  He jumped back into the bush as we did a UTurn to try to catch a photo.  He is hard to see in the photos, but you can see his ears as he peeks through the leaves at us.

Terrace Bay is a pretty and tidy town with a conservation area, shops, a lighthouse and a lovely beach front.

A little further on we crossed over the Nipigon Cable-Stayed Bridge. It looked like a beautiful piece of engineering over the Nipigon River. It is apparently the “narrowest transportation bottleneck between the Atlantic and the Pacific Oceans in Canada”. It was famously closed for a short period after a winter storm in 2016, when all of the bolts holding down the main girder failed, causing the deck of the bridge to lift by about 2 feet. The next morning they “McGyvered” the bridge by putting down some concrete weights to hold the whole thing down. I’m glad we read the story after we crossed it.

In Nipigon, we saw a sign for the town of Red Rock, and there really was a red rock to view from the highway. Red sandstone and sillstone were deposited in the region about 1.4 billion years or so ago when this area was a desert.

We pulled into a hotel area in Thunder Bay at about 10:30pm.  We know that all of the hotel chains are offering enhanced cleaning and limiting contact but our hotel requirements also included a ground floor room . We don’t want to walk through the lobby and we don’t want to ride in an elevator with other guests, just to be safe.  The staff were very pleasant and the room was nice enough – but only 2 double bed rooms were available on the ground floor – no Suites or Queen beds.  It was a little crowded, but we were too tired to notice anyway! We turned off the air conditioning unit to avoid sharing germs with our neighbours, (it seemed like a good idea!), and hand sanitized the TV remote control and doorknobs for good luck.

While we never experienced the typical pre-pandemic cottage country Canada Day week traffic, there were lots of Canadians travelling. There were cars and RVs with luggage on top, bicycles on the back, and loaded with kids. The small non-chain hotels along the way had cars parked outside, and there were regular stops for road work and bridge repairs.

We wore our masks and gloves when getting gas and fast food. Plexiglass barriers were installed at all of our stops, but we saw very few people wearing masks. Perhaps this has changed as municipalities are starting to implement bylaws mandating mask wear indoors. 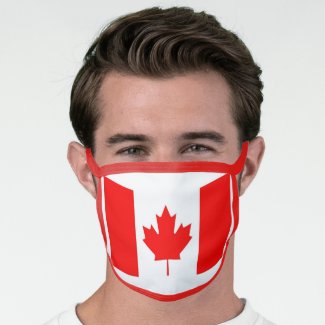 Oh Canada All Over Print Decorative Face Mask
by EverydayLillie

We had a great first day.  It was a long drive, (15.5 hours including short stops) but none of us had ever driven this way before and so the scenery was just surprising and spectacular.  The wildlife sightings were awesome of course, and my husband promised us we’d see a moose the next day!  We have decided to come back this way for another road trip – sometime when we are through this darned pandemic, and not in a rush to get to Calgary.  It was worth the drive.