A story about our flights from Ontario to Calgary and back on Flair Airlines, and some thoughts about Westjet and customer service.

We’ve been staying out of crowded places for the longest time, but we decided it was time to travel again. With only about two weeks of planning, we booked a flight from Southern Ontario to Calgary Alberta to visit one of our kids. We visited all the usual travel websites – looking for a “deal” as well as convenient flight times and locations.

In the old days we would book Air Canada, and sometimes Air Transat. After a few years we fell in love with the friendlier customer service offered by Westjet employees and their competitive flight pricing. We remember one year the President of Westjet sitting in a middle seat (if you can believe that) a few rows ahead of us. Apparently that was how he regularly travelled – right there with the customers to see what was going on. He resigned or retired back in 2018 or so, and it seems like the culture of Westjet has changed since then.

In 2019 Westjet was purchased by Onex, a private equity company – but before that about 19% of Westjet shares were owned by employees. More than 80% of employees owned shares in Westjet, and the employees helpfulness possibly reflected their ownership pride at the time.

Around the same time as I was booking our own flights west – I helped one son book a trip from Calgary to Fort St. John B.C. I again hemmed and hawed and checked all the travel websites, but in the end – as he was travelling to a smaller location – I had to choose between Air Canada and Westjet – which had very similar pricing and flights. I chose Westjet flights, finding the lowest flight and the most convenient arrival and departure times – but my choice could have just as easily been Air Canada if I had booked for another time. My Westjet loyalty has faded.

There have been a few times over the recent few years where flights have been cancelled or delayed and the customer service desk has closed down – or the phone lines are too busy to help.

For example the other day I called to ask a specific question about flight pricing changes – the hold time was – almost – 33 minutes!

Somewhere in the middle of the on hold message I heard something like “Respectful behaviour is expected of our agents and appreciated in return. Thank you for you patience and kindness”. Now the thing is, I am always polite and kind to customer service personnel, so I find this type of message – no matter how well written to be offensive. These messages are all too common these days when customers are expected to wait on hold for an unreasonable amount of time.

I am aware that there is an option to get a returned call – which is a very good thing, and they have what is called online Live Chat through social media – but this is not really live either. Here’s part of my Twitter live Chat….

So I know, complain, complain – I try not to be negative and 33 minutes on hold isn’t really a long time – but it is. We’ve gotten so used to waiting on hold for customer service that it’s the norm and we have to be told to be polite.

I’ve had similar long on hold (and much much longer) experiences with other major airlines, so I know it’s not just one airline – but this is becoming a normal thing. PLEASE PICK UP THE PHONE!

Flair from Kitchener Waterloo to Calgary and Return

For our trip to Calgary we ended up booking a Flair Airlines flight for the first time. It’s a newer airline, and has flights as low as $59 each way between Calgary and Kitchener/Waterloo. I believe we ended up paying about $580 or so for two round trips when we added in one carryon each way and 4 seats – but this is a pretty good deal for not too much advance planning.

For people who aren’t from Canada – there is less competition in booking flights, because we’ve historically had fewer airlines – so without booking way in advance, we often see one way flights of $600-800 for Toronto to Calgary. So $580 round trip may not seem like such a great deal – but it’s quite reasonable. Whether or not we choose these new discount airlines, I think they help to keep the price of the other carriers lower. Newer discount airlines include Swoop, Porter, Lynx and Canada Jetlines.

We regularly hear what a great airport Toronto Pearson is. It’s Ontario’s main international airport. Here’s an example of a news release:

Toronto Pearson has been named “Best Large Airport in North America serving more than 40 million passengers” for five years in a row by Airports Council International (ACI), the global trade representative of the world’s airports.

We always laugh at these glowing reports. Who writes this stuff, we wonder?

According to the J.D. Power 2022 North America Airport Satisfaction StudySM (Based on a 1,000-point scale), Toronto Pearson Airport was the fifth lowest scoring of Mega Airports, and sixth lowest when Medium, Large and Mega Airports were combined.

We don’t need surveys to tell us that if you go through Toronto Pearson airport, you will wait in line, and that’s never good. It’s just busy. So if we can we try to book flights out of smaller regional airports – like Hamilton, Kitchener-Waterloo and London Ontario. These airports typically have fewer flights – but have a few to Canadian destinations – and even to a few southern vacation spots. It’s also easier to pick up and drop off passengers from these airports.

While we were told to arrive at the airport 3 hours before our flight – we arrived 1.5 hours pre-flight – lined up behind 3 other people at check-in and then spent less than 10 minutes going through security. The thing is – EVERYBODY smiled at checkin – in security and when boarding the plane. We also found everybody smiling at Calgary International Airport -even though it’s larger and busier!

We paid $15 per seat each way for a larger Emergency Exit seat – and this gave us loads more leg room – and priority boarding. The planes were fairly full, – on the way to Calgary we had the row to ourselves. On the way back I sat next to a very large man (who really needed the larger seat – so I don’t fault him), who unfortunately was a bit of a noisy snorer!

One of the negatives to flying Flair, at least from my old person point of view, is that you are expected to print out or download your boarding passes at home. If we did not – that would add another $25 each person each way to the cost. So I thought, why not, I can print out my boarding passes – can’t I? So I did – and things were a little glitchy. Only one of my passes printed out. So I called Flair – and guess what? They picked up the phone and answered right away! In fact, I called again because I had another question – and they answered the phone right away. As per the boarding pass, they said no problem – just come to the check-in -no charge – we’ll be happy to help you – and they did.

For the flight home I had downloaded our boarding passes – and everything worked. I don’t like carrying information around on my cell phone – but I did. 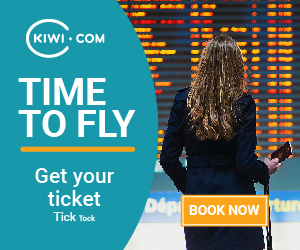 The flights were comfortable and uneventful, and the planes were fairly new and not too worn inside. On the way home we had windy weather and the pilot said something before landing about the crosswinds. My husband said to me – “oh I think that means they have to come in at a higher speed” (just making conversation – no inside info here). We landed safely but seemed to brake harder than I remembered from previous flights (maybe we just hadn’t been flying for the longest time). We were thinking isn’t that great the runway is surrounded by farmers’ fields, just in case they need more landing room.

We were off our plane and back home in a jiffy having enjoyed our Flair experience. But then, three days later a similar flight arriving at Kitchener Waterloo, braked hard and went off the runway. Nobody was seriously hurt, but we wait to hear if they’ve figured out what went wrong – and how not to do that again.! Thank goodness for the field at the end of the runway.

We enjoyed our short trip to Calgary, and enjoyed the flight and Customer Service from Flair, and the staff at Kitchener Waterloo and Calgary airports. Just when we thought we had everything figured out about how to book flights in Canada, we had something else to think and fret about! I hope that this review of our Flair trip has been helpful. Happy trails everyone.